David O’Russell’s romantic comedy-drama SILVER LININGS PLAYBOOK will stay with you because it has you really rooting for the odd couple at its centre.

I’ve had a change of heart.

Unlike the laser-focused Pat Solitano at the centre of David O. Russell’s SILVER LININGS PLAYBOOK who knows what he wants, it’s taken me two viewings to write this post. Because when I first saw the film on its UK release, although I enjoyed a lot of it, I did feel as a whole it didn’t connect together and live up to the hype that surrounded it from its American run. But things change. The movie stuck with me though and now having watched it again on DVD, I feel compelled to recommend it because there are a host of fantastic reasons that make it so worth seeing.

Bradley Cooper as Pat, Jacki Weaver as Dolores and Chris Tucker as Danny

Namely the acting. Bradley Cooper is terrific as Pat, newly released from a spell in hospital after becoming majorly unstable when he found his wife with another man. He’s now determined to get fit and get his life in order because then he’s absolutely sure his now ex-wife will want him back. It was a rightly award-worthy performance but although Cooper meets his match in the equally amazing (and Oscar-winning for her role) Jennifer Lawrence as Tiffany, a young widow with her own personal demons, my favourite scenes in the movie were the ones away from the main action – the sessions with Pat and his therapist Dr Patel, played with wry wit and spot-on timing by Anupam Kher; the scenes involving his mother Dolores, another brilliant performance by Jacki Weaver; and any time Chris Tucker turns up.

Tucker really shines as Danny, Pat’s friend from the hospital who’s really not quite ready to be released but tries it on anyway at every opportunity he gets – it’s a world away from his slightly high octane performances in The Fifth Element or the Rush Hour series and you see a whole new side of him as an actor. Special mention also has to go to Robert De Niro, whose portrayal of Pat’s OCD father is one of his best. For me, he’s rarely less than incredible in anything he does but his scenes with Weaver, in particular, are touchingly beautiful in their simplicity, complimenting each other’s personalities in a portrait of a marriage as good as you’re likely to see. 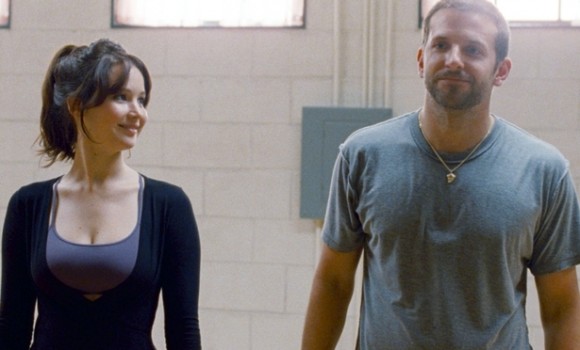 Jennifer Lawrence as Tiffany with Pat

What I’d first thought was the movie’s uneven tone on its initial watch – a breakneck first half with Pat getting his life back on track by moving in with his parents and dealing with his bipolar illness, followed by a more measured second half where he gets a handle on things and the romantic comedy element comes to the fore – really threw me. But now seeing the film again it seems really clever, with writer/director David O. Russell using this tone to mirror Pat’s fractured emotional state. Sorry I didn’t pick that up the first time, Mr. O. Russell.

I do love the early part of the movie where you’re thrown from one dizzying scene where Pat wakes his parents up at 4am: “I will apologise on behalf of Ernest Hemingway, ‘cos that’s who to blame here” to another, watching Pat battling his emotions and being painfully honest to his therapist about his discovery of what is inside of him “If you work your hardest, you have a shot at a silver lining”. Cooper’s face is a wonderful mixture of frustration and elation in these scenes that makes it gripping to watch. He was rightly nominated for his acting here, following his brilliant performance in Neil Burger’s Limitless.

And then right at the centre of the film, you also have a scene of such jaw-dropping brilliance that it knocks you for six. It also confirms in commanding style why Jennifer Lawrence deserved the ‘Best Actress’ Oscar this year. The scene is when having been let down by Pat on their bargain of him helping her with a dance competition, Tiffany bursts into the Solitano household to give Pat a piece of her mind and in doing so, confronting his father’s superstitions, dazzling everyone with her spirit and setting the stage for the movie’s hopeful finale. Which when that finale arrives, I defy even the hardest heart to not be moved by it.

So now SILVER LININGS PLAYBOOK is out on DVD and Blu-ray, give it a try – you won’t be disappointed.

Jason Reitman - "I'm trying to figure myself out through my movies"

That initiative called The Avengers so works!

I'm going to be captivated by LA LA LAND

Making a friend can change your life in Half Nelson

In Avengers: Age of Ultron "There are no strings on me"

The odds are in our favour with The Hunger Games: Catching Fire

Look through the JSHmoviestuff archives

“Now, shall we begin?” set phasers to stun for Star Trek Into D...

In the incredible-looking Man of Steel, how about Super…
Scroll to top