What may have started out as some kind of nautical holiday soon turns into a perilous fight for survival in ALL IS LOST.

I loved writer/director J. C. Chandor’s first film Margin Call – an absorbing, intelligent ensemble drama examining the financial meltdown – but rather than follow that with something in a similarly expansive vein, he chose to pair everything down to its pure essentials for this gripping, almost existential drama and in doing so, delivers another incredibly assured piece of film-making. 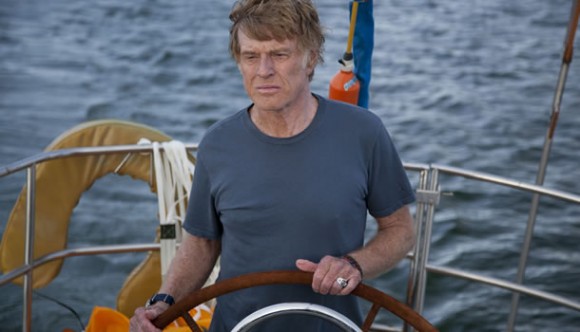 Robert Redford is Our Man

What makes it even more special is the presence of the one and only Robert Redford as his sole cast member. The 77-year old icon is in terrific form in what people would usually call a tour-de-force performance but here that seems too slight a definition for what we watch him do. In keeping with the movie’s minimalist metier, his character is only known to us as ‘Our Man’ in the final credits and for the rest of the time, we can only guess as to who he is and what he’s doing here – he has a family, or at least people that he knows, from the farewell letter we hear via voiceover that he’s composing in the film’s prologue but apart from that, we know (and he says) little.

That’s what makes it all so fascinating because it means we focus on him and his immediate predicament as we would in a silent film, visually – thanks to Frank G. DeMarco and Peter Zuccharini’s cinematography we’re right there with him on that open sea (and within it), from close up to wide shot, all the way through to the amazing final frames.

Redford’s woken abruptly in the opening sequence by a noise, which turns out to be a shipping container that’s separated itself from its ship and crashed into his small boat, the Virginia Jean. There’s a hole in the hull and water is pouring in. But we immediately see Our Man’s ingenuity as he repairs the craft and sails on. However, the ocean that up to this point has seemed as still as a mill pond now threatens to present this sailor with more problems, signalled in the approaching storm.

The heart of the film is watching how Redford fights to survive against the elements as they grow ever more severe and on more than one occasion, I felt a connection with Sandra Bullock’s similar battle in Gravity. But although the title of the movie is ALL IS LOST, its tagline is ‘Never Give Up’ and its to Chandor’s credit I think, that he’s cast the actor who memorably embodied the likes of Bob Woodward, Johnny Hooker, Denys Finch Hatton, Waldo Pepper and The Sundance Kid, to make us question that anyone in the same shoes as Our Man – even Robert Redford – can be defeated?

It’s a sobering, riveting way to spend 106 minutes and I’d love to see both Redford and Chandor walk away with some trophies in the upcoming awards season. Film-making as sparse and beautiful and visceral as this needs to rewarded.

The controlled creativity of Alexander Payne

The Report will uncover some very dangerous secrets

A journey to a new life takes Two Days, One Night

Get ready to reAssemble The Avengers

Gravity truly brings the wow factor back to cinema

You need to a take a trip to Nebraska

JSHmoviestuff Review of 2013: “Reminds me of a story”
Scroll to top